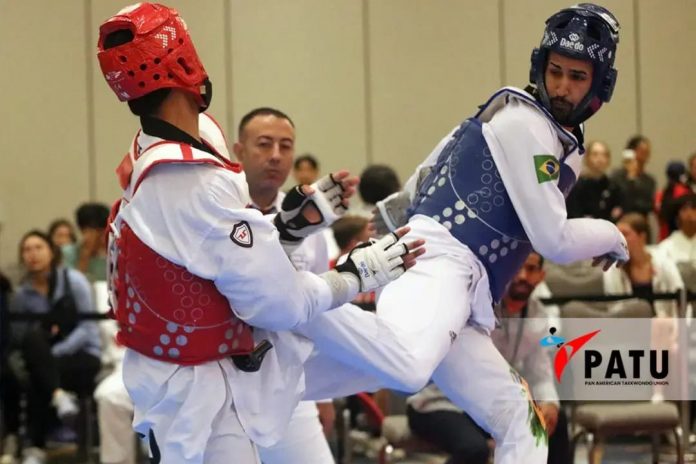 PATU Press – A large number of the continent’s best athletes with Olympic
qualification profile to Paris 2024 climbed to the top of the podium at the fifth
edition of the WT President’s Cup Pan American, a tournament that hosted 929
competitors from 39 countries for five days (August 17-21) at the Hyatt Regency
Jacksonville Riverfront, in Florida, United States.

The event, which has been held in the 2016, 2017, 2018, 2019 and 2022
editions under World Taekwondo regulations and in contemporary with all
Continental Unions, distributed 20 points to the world and Olympic rankings, and
awarded Wild Cards by categories to the next Pan American Championships
Children 2022, Cadet and Junior 2023 and Senior.

In the senior women’s category, the winners were:

In the men’s line:

The best cadets of the tournament were the athletes of the United States
National Team, along with team Nta – Coppell Tkd & Sports (USA) and United
Martial Arts – Doral (USA). The delegations from Puerto Rico, Ecuador and

Trinidad and Tobago also stood out.

The Performa team, from Puerto Rico, led the overall podium in the junior
category, escorted by the representatives of the United States in a competition
that had Puerto Rican champions from the Guayama Taekwondo Academy and
Ponce Leones teams, as well as from Ligavale (Brazil), Sport TKD and Blank Belt
World, both from Canada, along with medalists from Costa Rica, Uruguay,
Colombia, Haiti and the Dominican Republic.

“It is the first President’s Cup under my administration, not quite as we
would like because we know we can improve many things, especially to
have a greater participation, but it was necessary to hold this
tournament for the benefit of the athletes of the region and as a
preamble to a very busy circuit that continues next weekend with the
Costa Rica Open and extends to a whole South American circuit until the
World Championship in Guadalajara in November”, said Grand Master Juan
Manuel Lopez Delgado, president of the Panamerican Taekwondo Union, who
reiterated his gratitude to the PATU technical team and referee corps, as well as
to all the USA Taekwondo staff.